On Turning 3, Anticipating a Sister, and Adoring His "Lu-Thas"! 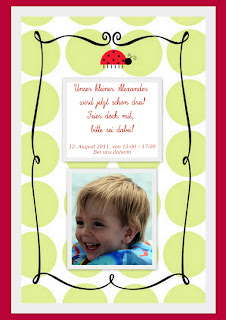 Alexander. Our strong-willed, surprisingly witty, increasingly talkative, bilingual "baby" just turned three yesterday. The birthday party involved a ladybug Piñata created by a friend, a breakfast cake (made at midnight) by Papa, a chocolate cake baked by Oma, a cake ordered from the local bakery with Alex's picture on it (mine), a walk to feed some local deer (with Oma, while Opa helped build the new swingset in the garden), and a party with neighborhood friends and their children. Despite my being in the 38th week of this pregnancy, the party turned out halfway decent, and the kids had a blast.

If you ask Alexander, he'll insist that he's five (like his older brother) but we're pretty sure we're right on this one. And now that the "terrible twos" have passed, can someone please tell me why he woke up last night, angry that he couldn't see his balloon, and insisting that he be brought downstairs for a glass of water? Yes, he can communicate now, but his current demands are so absurd; so unlike those of his older brother.

Fortunately, one member of the family has a will that rivals Alex's... namely, his Mom. So yes, he most certainly will end up eating the red bell pepper on his dinner plate (last night's scene... we used a bit of honey), he will not throw all of the couch cushions onto the floor, and there will be no snatching anything he pleases from his older brother. There are some things that are a no-go. Alexander has a personality where, if not kept in check, will prompt him to walk all over anyone in his path. On a positive note, this very same will has him so determined to wear big-boy underwear that he was fully potty trained (for both the day- and nighttime - as of July) and "accident"-free within a few short weeks. We also suspect that he'll be riding a bicycle without training wheels 1-2 years earlier than Lukas.

In short, Alexander's sheer determination is both inspiring and exhausting. 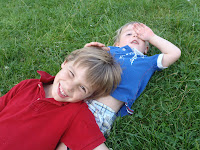 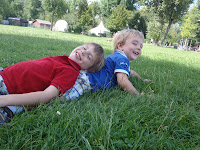 When they're not fighting, our boys are giggling and chasing eachother around the house or garden. I love watching Lukas interract with his little brother. "Oh, you want me to push you on the swing? Okay!" And we've just reached a major milestone in sibling conflict resolution. Thanks to a bit of motherly advice, Alexander now understands that asking politely is far more effective than snatching and screaming. And Lukas realizes that if he provides Alexander with a logical answer (i.e. "Yes, you can have Buzz Lightyear in just a minute."), there's a good chance that he might ward off attacks from his little annoying brother. I feel like a U.N. Peacekeeper who's just completed a successful negotiation between two hostile nations. :)
In other news, for the past week they've been sleeping in their own beds... which is HUGE! When I tell most of our friends and acquaintances this, they tend to ask in all seriousness, "Well, where else would they have been sleeping?" Ummmm... in our bed? Fortunately (or unfortunately) for us, we have a king-size bed, but with the baby coming I was on a mission to get them used to their own beds. Lying horizontal in bed with your legs across your baby sister is never a good thing. So they now have a new bunk bed, complete with slide, and the walls of their (shared) room are lined with wallpaper and a border with a sea explorer / pirate theme. It's now a super fun place for them to play... and sleep!

Of course, I also have to mention that Alexander has recently taken to saying some things that are just adorable. Always fascinated with "buggies" (of every shape and size), he's forever "rescuing" (and often killing them as a result), saying, "Go back to your Mommy!" And when we ask him if he needs help with something challenging, his response is innevitably "Nein, ich schaff das!" ("No, I can do this!"). Meanwhile the standard things (i.e. using the toilet, unbuckling his seat belt, or simply getting out of bed) are accompanied by "I need help!" Maybe this is to be expected. Afterall, he knows his baby sister will be arriving soon, and is so fascinated by the two baby girls in the neighborhood that he'll spend 5 minutes at their side, just studying them, and bringing them various toys to hold.

And what about Lukas? Well, as always, he speaks super well for his age and continues to love languages, singing fun "volkslieder" (folk music - in local dialect!) this summer at a local town festival... in his Lederhosen (traditional German leather pants)! He's also an avid story teller, and his enthusiasm is obvious in the huge breaths that he takes before each sentence. Maybe this is typical of a 5 year old?

Well, with baby #3 arriving any day now, I just wanted to sum up what the boys were up to developmentally, and how proud we are of everything that they've accomplished! Let's hope they're as smitten with this baby girl as we're bound to be!
Posted by Liz Kraft at 20:54

Liz Kraft
Liz Kraft is a writer, blogger, traveler, mother of three, and aspiring humanitarian,. Based in Erlangen, Germany, Liz currently works at hl-studios in Erlangen, an amazing advertising agency that she absolutely adores. She's also worked at Bavarian television, as a freelancer, and as a Marketing Communications Specialist at Siemens, where her job supporting a global product line took her on monthly trips across the Atlantic. A native of Florida, she has a Bachelors degree in Advertising and Public Relations from the Nicholson School of Communications at the University of Central Florida. More recently, Liz attended multiple online courses at the esteemed mediabistro.com, allowing her to pursue travel writing and journalism with much vigor. Despite having visited 20 countries, five of which she has been fortunate enough to call "home", Liz still feels as though she knows little about the world. From the townships of South Africa to the camps of Haiti, she finds it impossible to close her eyes to the great suffering - and beauty - of the world.